Is there such a thing as children’s literature? 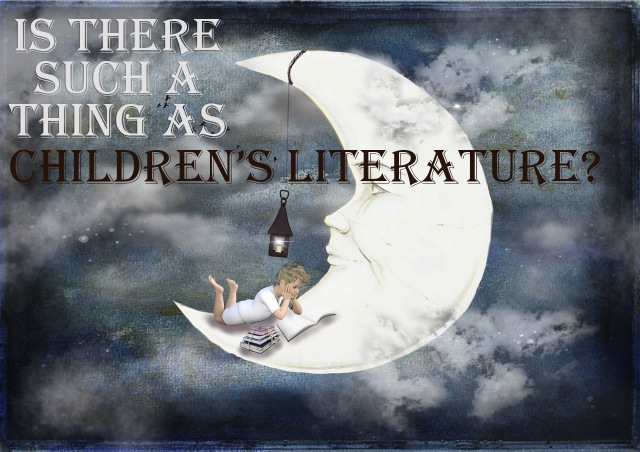 I classify myself as a children’s author.

But there are writers out there who believe that’s the wrong classification.

Mind you, these writers haven’t addressed me personally. In fact, they don’t know me. But I know — and respect — them. Which is why their thoughts on children’s literature (or rather, the nonexistence of it) has me thinking about my identity as a writer.

Maurice Sendak, author and illustrator of titles like “Where the Wild Things Are” and “In the Night Kitchen,” is the man behind books considered modern children’s classics. But he says he isn’t a children’s author.

Sendak repeated these sentiments in an interview with Stephen Colbert, which included the following exchange:

COLBERT: Why do you write for children?

SENDAK: I don’t write for children. I write — and somebody says, ‘That’s for children!’ I didn’t set out to make children happy or make life better for them, or easier for them.

Sendak isn’t the only one to express such sentiments. Neil Gaiman is quoted as saying,

I don’t think there is such a thing as a bad book for children. … Well-meaning adults can easily destroy a child’s love of reading. Stop them reading what they enjoy or give them worthy-but-dull books that you like – the 21st-century equivalents of Victorian ‘improving’ literature – you’ll wind up with a generation convinced that reading is uncool and, worse, unpleasant.

I stumbled upon this line of thinking while reading an article at Brain Pickings website this week. The article explores authors’ assertions that children’s literature is simply literature, and pushing it solely to young audiences is the result of a misunderstanding. They say the genre of children’s literature is nothing more than an arbitrary classification created by adults.

I’ve also explored the idea in the past that kid lit isn’t just for kids. But other authors like Sendak and Gaiman take the idea a step further by saying their books aren’t kid lit at all. Their books explore complex topics and can border on dark. Take Gaiman’s “The Graveyard Book” — the opening chapter involves the stabbing deaths of Bod’s entire family. Dark topics, but written in language accessible to both children and adults.

Fantasy author J.R.R. Tolkien is another author who argued against the idea of setting aside books as children’s reading and omitting it from adults’ reading lists. Tolkien disapproved of the idea that fantasy and fairy tales were deemed to be a more juvenile fiction.

According to Brain Pickings, “Tolkien insists that fairy tales aren’t inherently ‘for’ children but that we, as adults, simply decide that they are, based on a series of misconceptions about both the nature of this literature and the nature of children.”

The article then goes on to let Tolkien explain in his own words:

It is usually assumed that children are the natural or the specially appropriate audience for fairy-stories. In describing a fairy-story which they think adults might possibly read for their own entertainment, reviewers frequently indulge in such waggeries as: “this book is for children from the ages of six to sixty.” But I have never yet seen the puff of a new motor-model that began thus: “this toy will amuse infants from seventeen to seventy”; though that to my mind would be much more appropriate. Is there any essential connexion between children and fairy-stories? Is there any call for comment, if an adult reads them for himself? Reads them as tales, that is, not studies them as curios. Adults are allowed to collect and study anything, even old theatre programmes or paper bags.

[…] The common opinion seems to be that there is a natural connexion between the minds of children and fairy-stories, of the same order as the connexion between children’s bodies and milk. I think this is an error; at best an error of false sentiment, and one that is therefore most often made by those who, for whatever private reason (such as childlessness), tend to think of children as a special kind of creature, almost a different race, rather than as normal, if immature, members of a particular family, and of the human family at large.

Tolkien is onto something here. Children are just people, with curiosity and interests and literary tastes. Their literature should reflect that. But why can’t adults share in the wonder of a tale about a living boy named Bod who grows up in a graveyard raised by ghosts? Or why shouldn’t adults enjoy the illustrations and story of a boy who is in a bad mood and imagines himself to a land of wild things?

There isn’t a good reason, except that adults have created the classification of children’s literature. We shuffle that literature aside and delegate it to juvenile readers simply because it is written it accessible language to them.

What we consider to be children’s books are simply stories about childhood written  in a way that is accessible to both adults and children. There are two ways to explore childhood: through the lens of an adult, which leads to nostalgic adult content starring child characters (like Donna Tartt’s “The Little Friend”), or through the lens of a child, where we dive into and explore the childhood experience through a youthful voice (like Richard Peck’s novel “A Long Way from Chicago”).

In looking back to Sendak, he is known for writing and illustrating picture books, but critics and readers have sometimes classified his work as too heavy, dark, or inappropriate for children. But he didn’t set out to write the books for children. He wrote the stories he needed to tell in the method that best told them.

There’s a reason why, even as adults, we still cherish books like “Where the Wild Things Are.” It’s because they’re written for everyone.

1 Response to Is there such a thing as children’s literature?