With the start of a new year comes the start of work on “The Mountain of Dempsey Molehill,” my in-progress middle grade novel.

To get in the proper frame of mind, I’ve kicked off my year with reading “How Angel Peterson Got His Name.” Back in October, I read “A Long Way From Chicago.” Both books are written in an episodic manner, which is how Dempsey Molehill’s story will unfold.

Both “Angel Peterson” and “Chicago” are books I’ve read in the past, and both stuck with me. Each follows children through mischief and antics (although in “Chicago”, Grandma Dowdel is wreaking more mischief than the

children), and both are sprinkled with humor. Their structure has inspired many of my plans for Dempsey Molehill’s structure.

“The Mountain of Dempsey Molehill” is narrated by Dempsey, the middle child among his four siblings. The story follows a year in the life of the Molehill family — the year their father runs for mayor.

It’s a lofty goal to aim to fall among the ranks of authors like Gary Paulsen and Richard Peck. What can I say? I like to aim high. In Dempsey Molehill, I aim to capture similar mischief (and near mayhem) as Paulsen’s “Angel Peterson” plus humor and heart such as that in Peck’s “Chicago.” 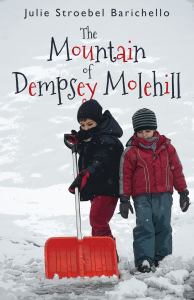 As I said in a previous blog post, 2016 is my year of immersion — that includes immersing myself in some of the best children’s literature on the market. Great reading is the starting point of inspiration for great writing.