It’s the most imaginative time of the year 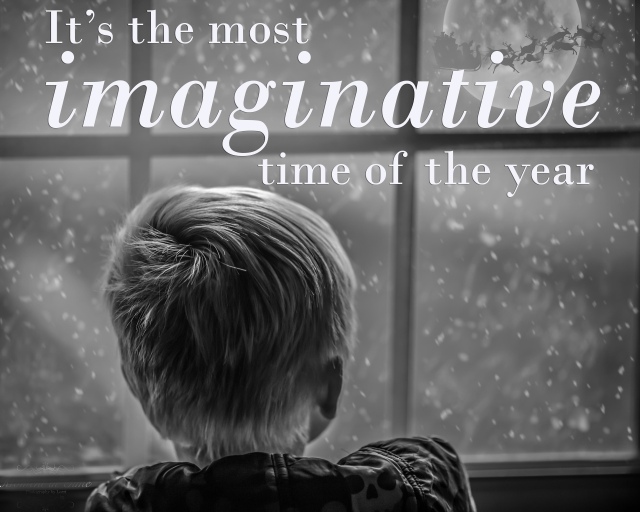 It’s one of the few times of year I see adults partake in a mass effort to bring imagination to life. Elf on the Shelf, Santa Claus, flying reindeer …heck, even shopping malls, NORAD and the U.S. Postal Service join the make-believe and provide proof of Santa’s existence.

While we say it’s all in good fun for the kids’ sake, the truth is it’s just as much fun for the adults.

It’s one of the many reasons I love this season. Everyone gets a free pass to believe in magic and miracles. Growing up, there was no excitement that compared to Christmas Eve excitement. The presents were only a portion of the excitement … I’m not sure receiving gifts would have the same romanticism if it wasn’t for the idea of a man flying through the snowy skies in a sleigh powered by flying reindeer.

On Christmas Eve, magic was real. It wasn’t like Halloween, when the magic was just pretend. At Christmastime, even the adults believed. And belief is a powerful thing. I knew this to be true from watching “Peter Pan” … belief was a matter of life or death for fairies.

There’s a corner of my heart that aches a little as an adult. I’ve outgrown believing in Santa (and, sadly, so have my nieces — this year turned out to be the year skepticism sniffed out the truth about the big guy in the red suit and their Elf on the Shelf). I miss the wholehearted belief in magic.

That’s one “Peter Pan” lesson I failed to learn. I grew up.

Adulthood doesn’t completely quash the Christmas imagination, though. Creativity abounds for new, clever ways to arrange an Elf on the Shelf (like this list from Buzzfeed … the Elf playing basketball with the Three Wise Men is my favorite), sneaking presents under the tree to keep belief in Santa alive, and even making up stories to perpetuate belief in Santa a little longer. Two years ago, when my nieces visited my town for its annual Christmas kickoff, Katy grilled on whether the Santa Claus at City Park was the real Santa. I rambled off a spur of the moment, five-minute speech about how the mayor of Streator has to call the North Pole in June to make sure we arrange to have Santa in town the first Saturday after Thanksgiving, because once August rolls around Santa’s calendar gets booked. Our city council goes out of its way to get the real Santa and not one of his helpers, after all.

It wasn’t the most elaborate or clever story, but the following year she asked if the mayor remembered to call Santa over the summer. So at least it was a convincing story. (When in doubt, throw a city official in the tale to make it believable.)

I hope everyone is having a bright, merry, imaginative Christmas season. And I wish you all — no matter your age — a few moments of genuine belief in magic, haven in imagination, and much joy.

This entry was posted in Writing. Bookmark the permalink.