A to Z: Imaginary friends popping up in kid lit

Throughout April, I’ll be tackling 26 A to Z topics related to children’s literature. Since today is all about the letter I, the topic of the day is imaginary friends.

Not the metaphorical invisible, as in everyone ignored him or he felt largely unnoticed. Noni was literally invisible.

Except to me. I could see Noni.

The first time Noni showed up was the year my older sister started school. For the first time in my life, I was home alone all day with no one to play with. So I did what many lonely children have done: I turned to my imagination to find a friend.

And on a drive to the grocery store one morning, there he was in the back seat beside me.

I don’t remember Noni’s grand entrance into the family, but Mom likes to retell the story from time to time. I was sitting quietly in the back seat, looking out the window, when I suddenly turned to gaze at the seat beside me and said, “Noni, why is that fat lady sitting on you?”

Imaginary friends are common partners in childhood, and lately they’ve been common in children’s literature.

Take A. F. Harrold’s “The Imaginary,” for example. It’s a book about a girl named Amanda Shuffleup and her imaginary friend, Rudger, getting separated when Amanda is in a coma. It explores the question of what happens to imaginary friends when their children aren’t around or outgrow them.

(You can check out my review of “The Imaginary” from earlier this year.)

Katherine Applegate’s latest chapter book, “Crenshaw,” also features an imaginary friend playing a main role. As a child, Jackson imagined an overgrown cat named Crenshaw as an imaginary friend. Even though he’s about to enter the fifth grade and considers himself too old for something as childish as an imaginary friend, Crenshaw returns when his family goes through a crisis. As the family loses their home, Jackson learns to cope with the situation.

There’s also my new favorite picture book, “The Adventures of Beekle: The Unimaginary Friend.” I fell in love with Beekle as soon as I saw him on the cover. (Seriously, how adorable is this little guy? He reminds me of the adipose* from the Doctor Who episode “Partners in Crime, Season 4, Episode 1). Once I read the story, I loved him even more. Beekle lives on an island where imaginary friends wait to be chosen, and he waits for a child to claim his as their own. But when he continues to be overlooked, he stops waiting and instead goes seeking to find his friend.

All of the books listed above were published in 2014 and 2015. Apparently imaginary friends aren’t only a trend among children anymore; they’re a growing trend in children’s literature as well.

* Bonus: See? I told you Beekle looks like the adipose! 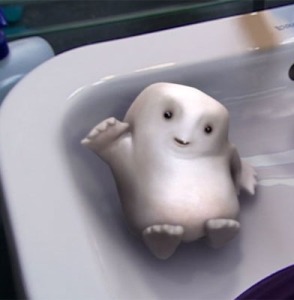 This entry was posted in children's literature and tagged A to Z Challenge, Beekle, Crenshaw, Imaginary Fred, Imaginary Friends, The Imaginary. Bookmark the permalink.

9 Responses to A to Z: Imaginary friends popping up in kid lit