Representation matters. Here’s why you should care.

I didn’t think much about diversity in childhood.

I grew up in a rural Midwestern elementary school district primarily comprised of white middle class students. A portion of the student body was Hispanic and Latino.

Throughout my entire grade school and junior high career, we had one black student. Her family moved to the area, stayed for about a year, and then moved out of the district.

It was easy for me to find likeness all around me. In my classroom, in my community, in literature, in television shows. It took effort to find differences. I never lacked a sense of belonging over issues like my race, religion, gender, physical abilities, etc.

I didn’t know that there were thousands of students elsewhere in the U.S. without that luxury.

This is Exhibit A for why representation is important.

At first glance, Emma Bennet looks like an average 10-year-old girl. It’s on second glance that you can spot she wears a prosthetic right leg.

Emma’s parents reached out to a prosthetic company to make a smaller scale prosthetic leg so she could have a doll that looked like her. A Step Ahead Prosthetics accepted the request and sent the lookalike doll to her with a note saying the doll was ready to live “without limitations,” just like Emma.

Her reaction says it all. For the first time, she finds herself reflected in a doll. The emotion is overwhelming for her – and, quite likely, for those who see the video.

This is Exhibit B, shared by a friend on Facebook. 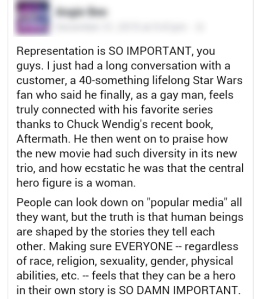 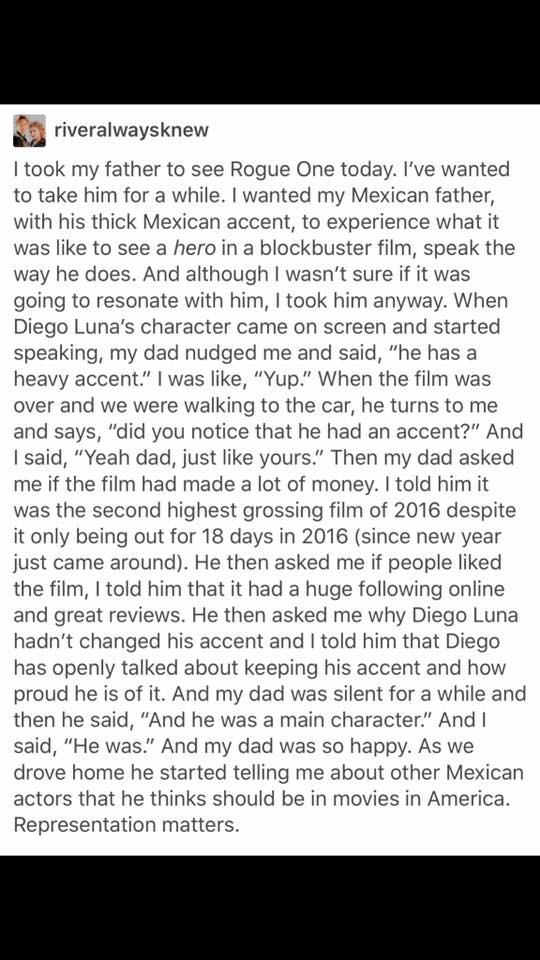 Exhibit D comes from Jacqueline Woodson’s poetic memoir “Brown Girl Dreaming.” Woodson grew up in the 1960s and 1970s, living part of her life in South Carolina and part in New York. Her words let me step into her shoes and take a few baby steps toward understanding what it meant to be a black child in those decades.

One particular passage in her poem “stevie and me” stands out:

If someone had been fussing with me
to read like my sister, I might have missed
the picture book filled with brown people, more
brown people than I’d ever seen in a book before.

The little boy’s name was Steven but
his mother kept calling him Stevie.
My name is Robert but my momma don’t
call me Robertie.

But we all have stories. Every single person who lives has a story. And every one of those stories is important. Those stories need to be told so others can say, “That’s just like my story. I can relate.” And so others beyond them can say, “I never knew your story – it’s different than mine, but it helps me find our mutual ground. It helps me understand you. It helps me respect you.”

Why diversity matters to the already-represented

I mentioned earlier that I never had problems finding myself represented in the community, books, TV shows, etc. So why should I care?

For years, I didn’t know I was missing out on anything. But what I didn’t know did hurt me, in a way. Not as much as it hurt the others who struggled to find themselves reflected in media and community, but it stunted me.

Representation in media builds empathy and understanding. Representation builds perception. It matters to have the Mexican man cast as the hero and not always as the villain so society doesn’t subconsciously (and unjustly) characterize Mexicans. It helps me understand a fraction of what it meant to grow up black in the south during the 1960s and 1970s.

For a long time, “diversity” seemed to be little more than a buzzword. College admissions essays asked for descriptions of diversity in my life. Workplaces discussed how to hire a diverse staff and why it was important. It wasn’t until I immersed myself in children’s literature that I truly began to grasp why diversity is more than a buzzword.

3 Responses to Representation matters. Here’s why you should care.