A to Z: A Grimm topic related to fairy tales

Throughout April, I’ll be tackling 26 A to Z topics related to children’s literature. After yesterday’s look at fantasy titles, I’m going to shift gears and take a Grimm look at fairy tales for today’s G theme.

Once upon a time …

Actually, that’s a bit of a misleading beginning for a blog entry about the Brothers Grimm. “Once upon a time” was a popular translation for fairy tales written by Charles Perrault (who penned variations of perennial favorites like Cinderella, Little Red Riding Hood, Puss in Boots, the Tales of Mother Goose …)

For the Brothers Grimm, I ought to have started this post by saying: Es war einmal …

So let’s start over, shall we? 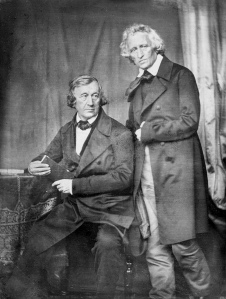 Es war einmal two brothers, Jacob and Wilhelm Grimm, began collecting folk stories and compiling them in a collection called “Children’s and Household Tales.” The tales traditionally were kept alive through oral tradition, but the Brothers Grimm took the initiative to preserve them in a more permanent format in the early 1800s.

Jacob and Wilhelm’s first collection of stories was released in 1812. More than two centuries later, the fairy tales they had the foresight to preserve have become the foundation and reference point for multiple adaptations across all forms of media.

The Brothers Grimm are a household name these days, and many of their stories continue to be household stories. (Although most are told through Disney-fication.) Children and adults alike recognize stories like Hansel and Gretel, Rapunzel, Cinderella, Little Red-Cap (aka Little Red Riding Hood), and Snow-White and Rose-Red.

But just how many fairy tales did the Brothers Grimm collect? How many can the average person name off the top of their head? A few months ago, I could probably come up with ten to fifteen.

Even though I could count the number of titles I knew on my fingers and toes (and still have five toes to spare), I considered my fairy tale familiarity to be high. I figured I would recognize the majority of tales in a Grimm collection.

Boy, was I wrong. 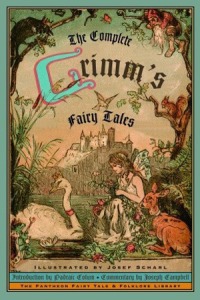 Several months ago during a regular Barnes & Noble excursion, I encountered a Pantheon edition of “The Complete Grimm’s Fairy Tales.” The husband and I are slowly but surely building a collection of children’s books so by the time a Baby Barichello enters the scene, we’ll have a well-stocked library. So I figured I’d buy the collection.

When I got home, I sank into a bubble batch and decided to pass the time by brushing up on fairy tales. When I turned to the table of contents, I found a few more tales than the fifteen I could name off the top of my head.

In fact, I found 195 more. The Grimms collected and recorded 210 folk tales.

And I didn’t recognize the majority of them. There were titles like:

The original tales are darker than the Disney versions, but not so dark that they’re inappropriate to children. Any violence in the stories is unglorified and not graphic (most sentences are as simple and concise as, “He cut off the troll’s head” — no blood and guts). In fact, the tellings aren’t any scarier or more graphic than the animated telling of The Wolf and the Seven Little Kids shared above.

A complete collection of Grimm’s fairy tales is a book I recommend for any family, whether the household consists of adults only or children as well. The tales are a cultural and literary root, and it’s a great feeling to dig deep and familiarize yourself with original translations of stories that have become ingrained in our culture. Plus, it’s nice to learn some new fairy tales along the way.

This entry was posted in children's literature and tagged A to Z Challenge, Brothers Grimm, Fairy Tales, Folk Tales. Bookmark the permalink.

2 Responses to A to Z: A Grimm topic related to fairy tales