Last night, the hubby and I watched Disney and Pixar’s latest collaboration, “The Good Dinosaur.”

When I first saw previews for the film, I wasn’t overly eager to see it. But last night was a humdrum evening and we decided to drive up to the theater. I was in the mood for popcorn and soda.

The movie was better than I anticipated. I genuinely laughed at several parts. (The hubby is still shaking his head over how much I laughed at the cowboy T-rexes. Seriously, though … you try watching a T-rex shout, “Hyah!” and gallop away like he’s riding a horse when he’s actually just galloping like kids do when they ride stick horses. I don’t know how he was stoic enough to only smile and not break into fits of giggles.)

The plot had a decent (if slightly heavy handed) message, too, about overcoming fear and making a mark on the world. The “make your mark” conversation put me strongly in mind of Peter H. Reynolds’ children’s book “The Dot.” If I had children, I would host a home viewing of “The Good Dinosaur” to correspond with International Dot Day. 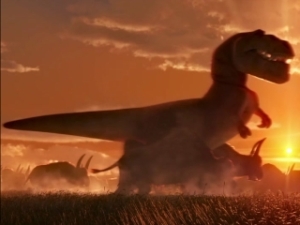 I also like that the villains of the film weren’t the T-rexes. (After all, it would be harder to laugh at their galloping if they tried to eat Arlo, the main character. I’d have to assume an appropriately outraged expression whenever they came on screen.) A different breed of dinosaur turned out to be the bad guys.

But the movie had one sticking point for me. Early in the film, Arlo and his dad chase after a “critter” (a.k.a. a dog-like human eventually christened Spot). When a storm hits, Arlo’s dad is swept away when the river breaks its banks, and he dies. Within about another 15 minutes of storytelling (maybe even less), the critter returns to Arlo’s family farm. He tries to chase the critter off, only to fall into the river and be swept away.

Why didn’t Arlo just get swept away while he and his father were chasing the critter instead of killing off his dad?

Arlo and his dad

There was no real need in the plot to kill Arlo’s father. It would have made plenty of sense to have Arlo get swept away while he and his dad were in the woods. The rest of the movie is about Arlo trying to get home and bonding with Spot on the journey. At the end of the movie (spoiler alert!), Arlo makes it home and runs to his mother. Why not have him make it home and run to both parents?

There’s a scene near the end in which Arlo dreams/hallucinates his dad is with him. Then he realizes it’s not real. That still could’ve worked with Dad being alive. Arlo could think he’s been found and is safe with his father, only to realize it’s a false sense of security. It actually makes more sense to do that if the father’s alive. Why would Arlo think his father’s really there if he’s dead and buried back at the family farm?

Disney has a long history of killing off parents (or simply never explaining where they are — where is Andy’s dad in the Toy Story films?). Can’t all movies be like “The Incredibles,” with both parents alive and raising their children?

Yes, yes, I know The Atlantic offered an explanation about why cartoon mothers are often absent. The reasoning is likely on target, too.

But in “The Good Dinosaur,” it just doesn’t make sense. Arlo still could’ve been swept away, had his adventure, and made it home safe and sound to both parents.

All in all, though, it’s a good film. Judging by the gales of laughter from the kids in the theater, it’s especially a hit for young viewers.

This entry was posted in Children and Family and tagged children, Disney, family, Movie Review, Pixar, The Good Dinosaur. Bookmark the permalink.