Christian Boer: The man who makes the world read

Imagine you’re reading on an e-reader. As you read, letters like a lowercase b flip upside down, mirroring to become a p. Or the horizontal line in a lowercase e disappears, leaving behind a c.

Soon, none of the letters look like they’re supposed to. The words become gobbledygook.

Welcome to the daily challenge faced by dyslexic readers.

The Dyslexia Center of Utah reports 1 in 5 people deal with dyslexia. The center’s research says dyslexic individuals are highly creative and intelligent. However, the learning disability makes it difficult to use and process linguistic and symbolic codes, particularly alphabetic letters representing speech sounds or number and quantities.

The inability to make sense of letters and numbers on a page is a setback for dyslexic learners. They miss out on learning opportunities as well as the simple pleasure of reading a novel for enjoyment.

Christian Boer is looking to change all that. 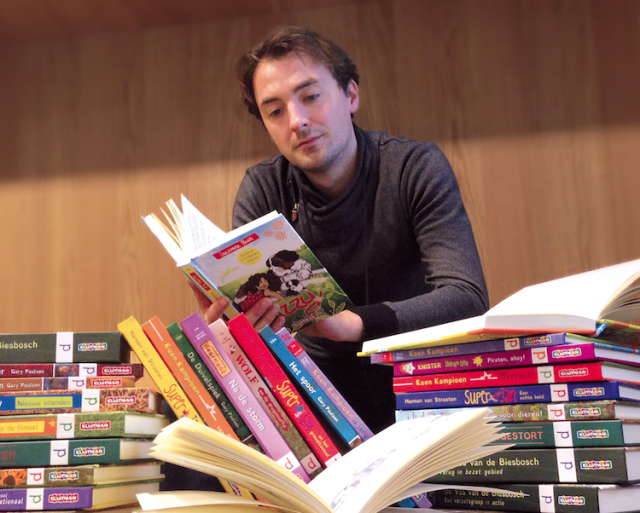 Boer is a Dutch graphic designer who created a new font, Dyslexie, as a thesis project at the Utrecht Art Academy in the Netherlands.

Boer knows firsthand the pains of being dyslexic — he, too, struggles to make sense of linguistics and letters. To counteract the challenges he faced, he created the typeface to make letters more distinguishable from each other, thus making it less likely for dyslexic readers to mix up similarly styled letters.

Traditional fonts are designed solely from an aesthetic point of view, which means they often have characteristics that make characters difficult to recognize for people with dyslexia. Oftentimes, the letters of a word are confused, turned around or jumbled up because they look too similar.

Now that he created a font to make reading easier for dyslexic people, he’s taking it one step further.

He’s giving it away for free.

Boer’s website, dyslexiefont.com, details the mechanics of how the font was conceived and designed and how it helps dyslexic readers make more sense of symbols on a page. Moreover, he gives text layout tips for dyslexic readers, such as:

The font was developed in 2008 and released in English in 2011, according to a USA Today report. It has been used to publish several Dutch books, including translations of John Grisham novels and the Steve Jobs biography.

A concept as simple as changing the font — something we do in word processing programs with the click of a mouse — is bringing reading and learning to a staggeringly large portion of the population that previously was excluded from the joys of reading. A few newly shaped letters and numbers could revolutionize the learning process for people who previously struggled to make sense of pages set before them.

Boer will forever rank as an extraordinary man in my book. Reading is a vital part of learning and living. He is making a difference in the lives of thousands, one letter at a time.

1 Response to Christian Boer: The man who makes the world read